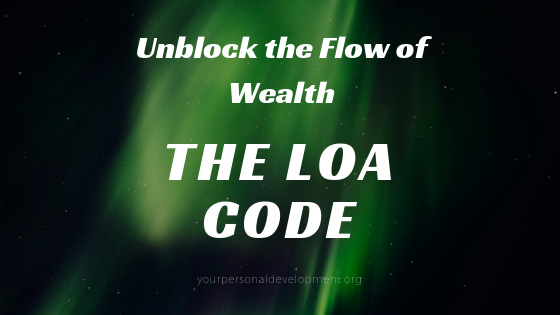 Many people start well with the practice of the Law of Attraction, but somehow they end up feeling stuck. The mental blocks that appear on the road are quite a regular thing.

The question is how to unblock your mind to keep the positive flow?

The Law of Attraction Worries

I have experienced many ups and downs since I started to practice manifestation and I am here to help you unlock the flow again.

The worry was one of the primary reasons why I was failing.

It was also the reason behind the frustration of many others, and it might be just the thing what is holding you down.

Worry brings fear and fear is crippling for the positive manifestation.

When these negatives become strong enough, they create a TERROR BARRIER which prevents us from moving forward, and it pushes us back to a starting point.

We live in a world which is one vast ocean of energy.

This energy has its currents, and those currents can lead you to success and abundance, or they can take you on a totally opposite side.

A side where lack and limitation lives.

Since you are here, I guess that somehow you ended up on the wrong stream.

The key to propelling yourself back on the positive side and breaking that terror barrier hides in your mind. It is in the way you think.

However, for some people is much more difficult than it sounds.

You are probably not aware of the negative energy that comes to your life from many different sources all around you.

This negative inflow is often slow and hard to notice.

Moreover, it is deadly for success with the Law of Attraction.

It can come from a friendly neighbor, a colleague from work, a person on a TV, from one innocent line in the newspaper, from your husband or wife.

It also attacks from within through some of your long forgotten negative experience, your fears, and worries.

It can paralyze you and keep you in bondage forever, or until you DECIDE to snap out of it.

The problem is that we hardly ever take an effort to recognize these facts.

We let the negative energy to build up by itself and without control.

The Law of Attraction can’t work positively for a person who is magnetized by the negative.

The same way your mind becomes magnetized by that negative energy, it can be reversed and made positive.

It will take a lot of effort and willpower to make it happen, but it is more than possible.

Therefore, to unblock the Law of Attraction manifestation, you will have to follow these four steps:

Within this post, I will draw what I have learned and applied to unblock the flow while practicing the great law.

Have you heard about the book Think and Grow Rich by Napoleon Hill?

If not you can read a short review over here.

This book is one of the first philosophies about the secret to success and the Law of Attraction.

The whole concept of the book is to teach you how to think in favorable terms and therefore to attract riches to your life.

I am studying this book for years now.

The book has changed everything for me.

You see, my mind was magnetized with a considerable quantity of negative energy which was building up within me.

It took years to create these harmful barriers. Therefore, it also made a lot of time to break and push through them.

I will share with you some valuable steps you can use to detect and remove your own mental blockades that prevent you from enjoying all the good that life has to offer.

What Blocks The Law of Attraction?

To beat the enemy, you must first know its name.

It took me a lot of time and a lot of self-search to discover what was blocking me from success in life.

Once I have made a self-analysis I made a step forward and saw that all those problems that were smothering me have their grip around the neck of almost everyone around me.

In every one hundred people, there is five percent of trouble-free individuals.

They learned how to break free from the grip of problems.

The rest of the group has its mind occupied with at least one of the troublemakers.

Two conditions are at the top of the list.

Your own fears, doubts, and worries

Understand this and understand it well. Fear is nothing but a product of your imagination!

Worries, doubts, and indecisions are forms of a sustained fear that were building inside of the mind of the individual for years and years through the aid of harmful use of imagination.

They come out on the surface whenever we are about to meet a situation, person, or something else we are afraid of.

Until then, they remain within our subconscious mind where they are hard to detect.

If you go out and start asking people what their fear is or do they fear, everyone will say NO! I don’t have concerns.

They will tell you a lie.

Everyone is afraid of something, and that fear is unconscious until we meet it in reality.

Once you confront your fear, you will know its name. It will tell you. Only then will you know who you are up against.

Fear and its products are deadly, fatal, destructive for the positive use of the Law of Attraction.

Moreover, according to the definition of this law, whatever you hold in your mind and your heart, you will attract to your life.

There are many forms as there are human experiences.

We all share the same fears in one measure or another.

These are six basic fears that live in the subconscious mind of almost every living person. Everything else can fall under these six.

See what it can do to human life.

Back in 2008 something happened with a stock market.

Some SP500 companies went down, and they pulled a lot of other companies down with them.

This was an adverse event which was slowly but surely planted in the minds of people all over the world.

All media were screaming one news. STOCK CRASH!

Since almost everyone is subconsciously afraid of poverty, they were resonating with this information.

Therefore it brought up thoughts of worry, doubt, and indecision.

Eventually, it all crystallized into an economic crisis which was the product of the mass fear.

A few people who were immune to this kind of fear were left intact.

Everyone else suffered a negative result because of the inborn fear of poverty.

Following the laws of nature, they attracted what they were afraid.

Many families broke apart because of the fear which was planted in their minds.

Many businesses went down and under for the same reason.

A lot of people suffered great loses all over the world just because they let the fear to rule their lives.

The fear of ill health keeps doctor offices busy all over the world. Especially at the times of the “epidemic.”

Research showed that around 75% of the patients who are visiting primary care doctor are suffering from an imaginary disease (hypochondria).

One person who is really sick can cause many to become “infected” because of the inborn fear of ill health.

The thought of getting sick starts to play with the imagination of the person, and eventually those thoughts produce the symptoms of the disease.

The pharmaceutical industry is making a vast fortune annually from our inborn fear of ill health.

The truth is, no one can enjoy the flow of abundance regarding health, wealth, and happiness if they suffer from fear.

It is easier for us to think negatively instead of positively.

We like to fill our imagination with thoughts of lack and limitation instead of wealth and abundance.

The mind will return to us whatever we think of. That is the LAW.

Many people are failing to succeed in life because of the lack of awareness that we can control our own imagination.

Therefore, they miss realizing that we can control our lives in a great measure.

Also, that is why so many people stay where they are through entire life even though they secretly wish for better and more.

Sadly, they almost never receive it because of the enormous blocks in their thinking.

Like I have said, this universal enemy is nothing but a product of our imagination.

It is a STATE OF MIND.

Negative influences from the environment

The most common weakness found in all human beings is the habit of leaving their minds open to the negative influence of other people.

As you have noticed so far the world in which we live in is predominately filled with negative energy which is being realized from the minds of other people.

This energy spreads itself in every direction, and it is affecting everyone who is susceptible to be influenced by it.

Sadly, almost everyone is walking around with their minds wide open.

They let others do their thinking for them, and as a result, they experience the same adverse effects in their lives as the person who infected their mind.

The sources of these “evils” are many.

Understand, that you are influenced almost non stop from everyone and everything you come in contact with.

And, if you don’t close your mind tightly against all those negative influences, the success will stay out of your reach.

Only 1% of the population exercises this ability.

They are the ones to who you possibly look up to, or even worse you envy them.

You are no different than a person who has it all.

The only difference is in your susceptibility to negative influences all around you.

To successfully apply the Law of Attraction you and every other thinking person will have to take full possession of your minds.

The mind should be thinking only about what you permit it to think.

I have experienced a significant improvement in my results the first time I started to practice the Law of Attraction.

However, by the time when I was slowly exceeding the people around me, I have experienced that negative force which pulled me back down.

All the good thoughts, feelings, and things that I was manifesting in my life were taken away from me. It was me who took it away.

Later on, I found out it was nothing but a lesson for the next time I try.

We have a feeling for which we invented the word jealousy.

The people around me, at least those negative heads, were throwing small poisonous darts at me with the intention to keep me on their level of thinking.

For them, everything was doom and gloom.

Since I was still susceptible to their influence, it was affecting my manifestation.

However, with a massive effort of willpower, I managed to snap from the nightmare which everyone is living, and everything started to go up again.

My mind was in my possession once again.

The second half of this post is based on my experience with some methods and techniques that I have discovered along the way.

These “tricks” helped me to protect myself from all forms of blocks that can appear while manifesting what I want.

They can help you to protect yourself as well.